Central to this 10 Day Journey of Prayer Challenge is the introduction to what I call Levels of Prayer.  These can also be considered stages of prayer.

Whatever level of prayer you are at or even if this is simply an exploration of the possibility of taking the journey it helps to be aware of the whole map of the journey.

In the experience of this writer most writing about the practice of prayer is concentrated on Level 1 which is the reason why most prayer is ineffective. 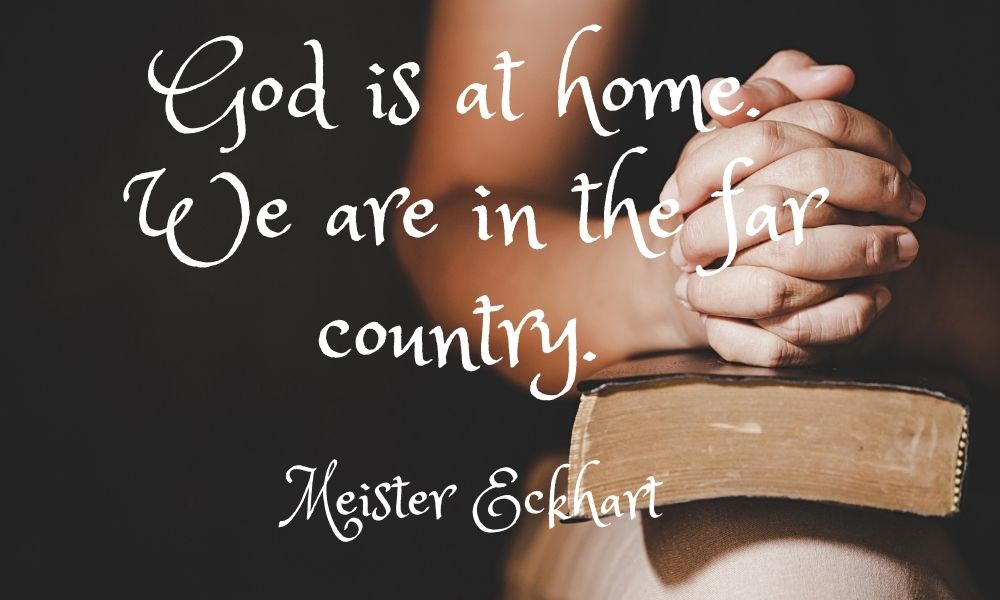 Receptivity is a way of being in the world. It is a way of asking without asking. However, this is not the core approach for those who are taught to pray from Level 1 prayer consciousness.

With ordinary level prayer there is a core belief system in place that keeps the practice of prayer from being effective. This is the core belief in the personal sense of self.

It is from this core belief in the sense of the separate personal self that Level 1 prayer is engaged with.  The reason why prayer at this level is not answered is because there is no connection between you and the Divine.

While you maintain your core belief in the separate personal self you will not be energetically connected to the Divine.  This is because the Divine does not recognise you as being separate from it.

God is not a creator of persons – Bernadette Roberts – The Real Christ.

Nobody at any time is cut off from God. ― Meister Eckhart

You are the one who cuts off your connection to Divine Intention intended to be gloriously expressed through you through your attachment to the separate sense of self.

The infinite I AM is forever waiting to express through you as the finite “I am.”

The belief in the separate sense of personal self is what is meant by the word “sin.”  Sin is not about your moral conduct related to the finite idea of good versus evil.

This is a core misunderstanding of this word in the teachings of Christian Churchianity.

When the Master Jesus heals people, he follows it by a clear instruction. He says, “Go and sin no more.”

The master is not advising you about your moral conduct.

He is advising you to give up your core belief in the idea that what you feel yourself as separate. This belief in your sense of separate self is not your core reality.

Your core reality is Oneness.

Without your willingness to give up this core belief in your feeling separate from the Divine the malady that was healed may well return.

With the maintenance of this core belief in separateness your prayers are not answered because they go against the primary reality of At-One-Ment.

The way to make prayer effective is to take the journey into this experience of Oneness and let Oneness flow into the world through you.

In this way you honour the line from the Lord’s prayer, “Thy will be done on Earth as it is in Heaven.” The heavenly experience can only come through you. It is designed to come through you would that you be willing to trust it.

In Christian teachings this is called Christ consciousness. This is an experience whereby you KNOW that you are not separate from the Divine. St Paul called it “Putting on the Mind of Christ.”

This experience takes you beyond Level 1 prayer. With this grace experience of awakening beyond the sense of the separate personal self you now KNOW that you and the Divine are never separate.

You are now ready to be a receiver of Divine Intention which is your true-life purpose and your way to real prosperity. 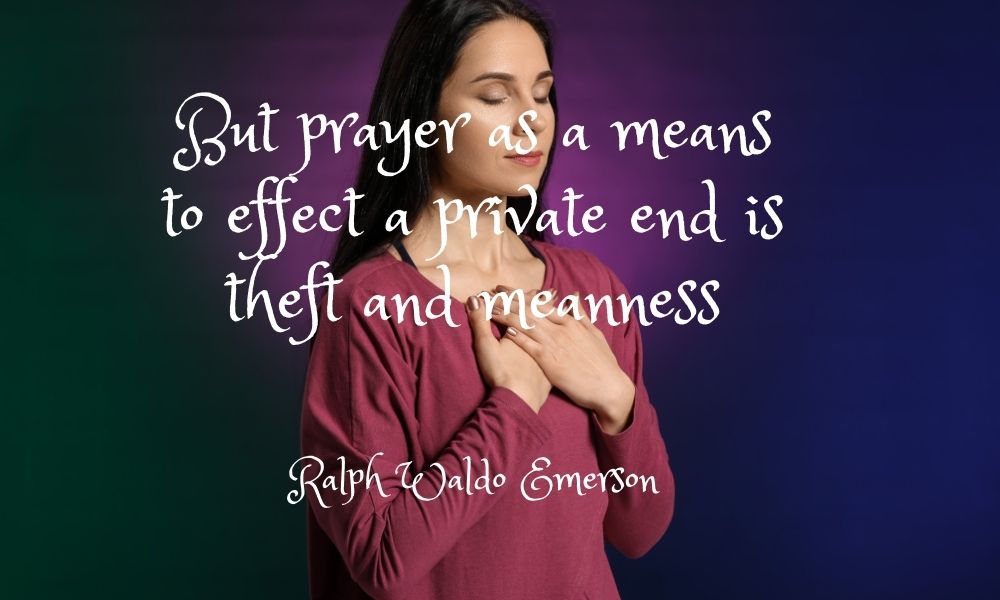 As people take the journey of prayer they move into a more philosophical or metaphysical approach to prayer.

But prayer as a means to effect a private end is theft and meanness. It supposes dualism and not unity in nature and consciousness. As soon as the man is at one with God, he will not beg. – Ralph Waldo Emerson

I refer to Level II prayer as metaphysical prayer.

The difference between level I and Level II is that the focus at level II is more directed to the experience of unity rather than on the idea of separation.

Here are some aspects of the Level II approach to Prayer.

Level of Prayer – Prayer from One Power

It is not a KNOWING based on direct experience. (Level III).

Individuals at this Level II prayer may affirm that “We are all One” but this is not felt to be the ground of our Being. It is mere intellectual ascent. One is persuaded of this as a possibility but it isn’t revelation.

For many and even most people established at Level II prayer there has been no DIRECT EXPERIENCE of such Ground of BEING.

At Level II prayer there is still the core attachment to the experience of the personal sense of the separate self even if this experience is overridden by the intellectual idea of At-One-Ment.

At least there is the movement toward the awakening of the reality beyond the core belief in the separate sense of personal self. 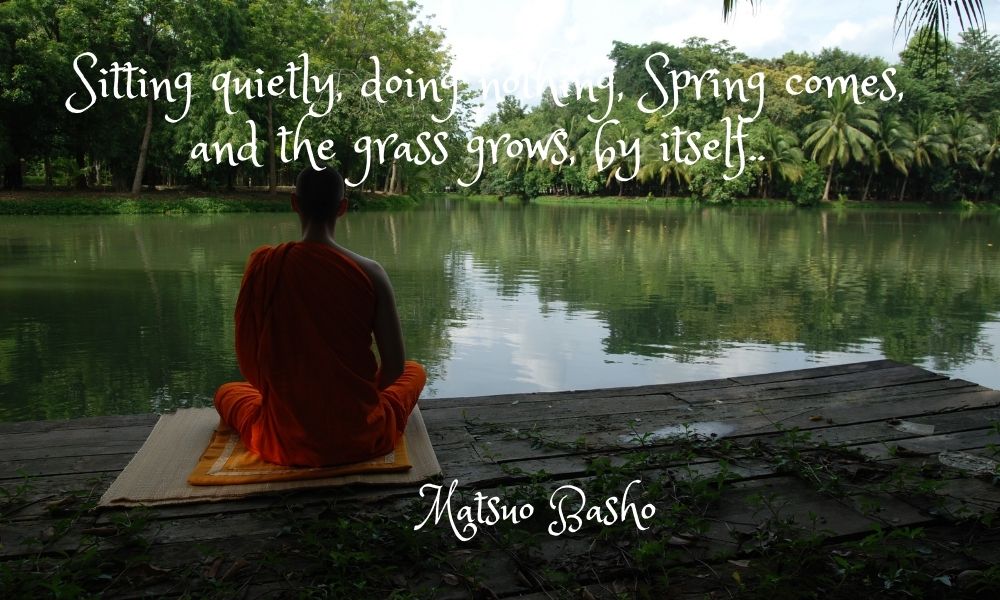 Another aspect of Level II prayer is that the practice of prayer becomes an inner focus.  You are not a beggar or someone who petitions the idea of a God beyond your sense of personal self.

You become a receiver from the promptings of the Still Small Voice Within as you connect to the Kingdom of Heaven that is within you.

At the centre of your being, you have the answer; you know who you are, and you know what you want. ― Lao Tzu

As the Master Jesus instructed you enter within, close the door (shut down your overthinking mind), and pray in secret (silent allowing).

This turning within to the Secret of Secrets within you is the real meaning of the word “Conversion.”

This means “To turn around.” It doesn’t mean that you change your religious affiliation from one teaching to another. 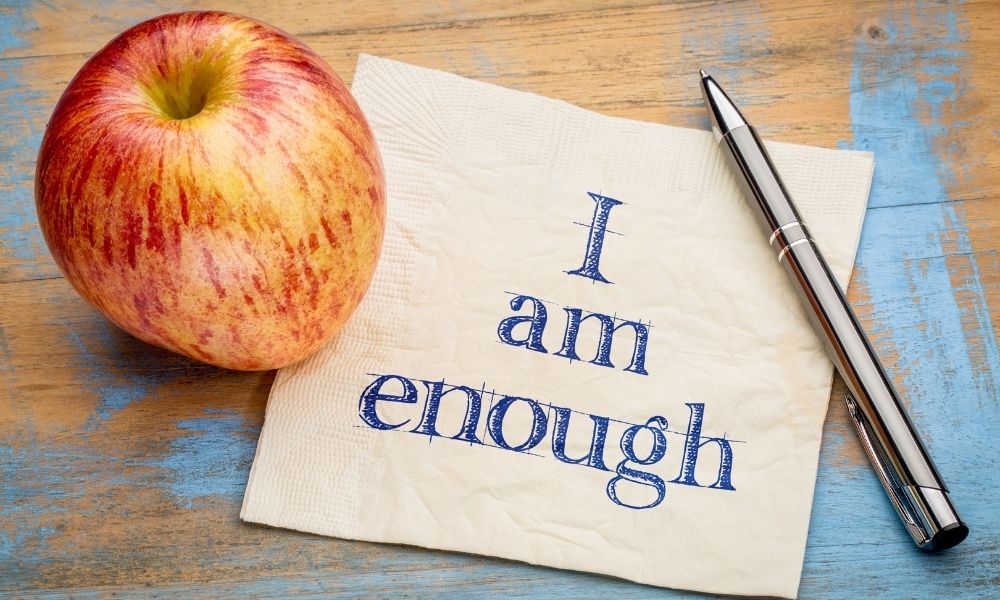 Another difference in approach to prayer at Level II is the aspect of affirmation. This arises from the statement in the Bible which states, “Your Father KNOWS what you have need of BEFORE you ask.”

Thus, if God or Divine Intention KNOWS what you have need of whether it be health, finances, or relationship whatever it might be then all you must do is affirm that it is already given.

This is the approach to prayer as emphasised in the teachings of the New Thought Movement with its emphasis on the power of the mind to create what is intended.

At Level II the focus is learning HOW to PRAY to the God Within. However, the experience of separation remains. 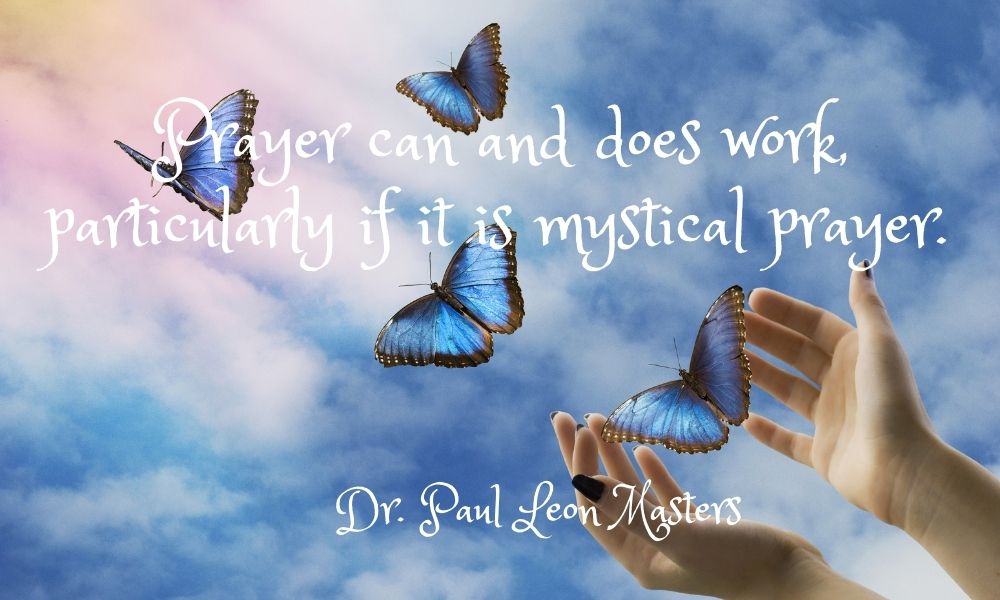 At Level III prayer you become a mystic.  A mystic is an individual who has been graced a direct experience of the Ground of Being referred to by the word “God.”

This makes the individual a KNOWER rather than a believer. With this experience the individual has their own inner authority in relation to their spiritual unfoldment arising from within.

Level III prayer is where you are beginning to have access to the Infinity within you. This is the meaning of the Biblical phrase, “I have manna within me that the world knows not off.”

Let’s explore each of these aspects of Level III prayer in return.

Sitting quietly, doing nothing, Spring comes, and the grass grows, by itself. – Matsuo Basho

At Level III prayer the focus is on being a receiver of Divine Intention. This is what it means “to pray always.”

You might begin with words but the intention is to move beyond words.  There is an attitude of openness to the way in which the Divine flows through you, speaks through you, acts through you.

This is living the mantra “Thy will be done.” You are not dictating what is to be received through you. Your focus is on paying attention to the way in which your energy flows.

The Authority for Prayer 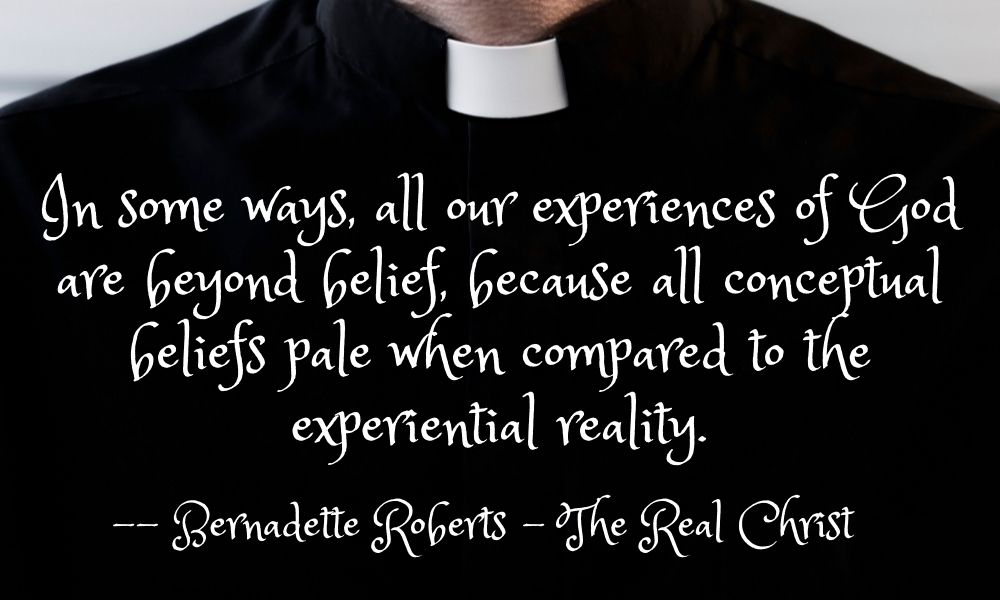 In some ways, all our experiences of God are beyond belief, because all conceptual beliefs pale when compared to the experiential reality. — Bernadette Roberts

At Level III prayer the authority for your prayer journey most definitely comes from within.

You are not directing your prayer life from the dictates of an outer authority or the authority of the personality or overthinking mind.

You are authorised through the direct experience of KNOWING by way of grace.

A genuine revelation of God can even ruin man’s beliefs – why? Because Eternal Truth is beyond his belief boxes. – The Real Christ – Bernadette Roberts.

This does not mean that you never refer to scripture. At Level III prayer you move beyond logic and theology.

Living from inner authority means you increasingly become a happening, a flow of creation. You give no thought so that you can be thought through by Divine Intention.

Alignment with the Transpersonal 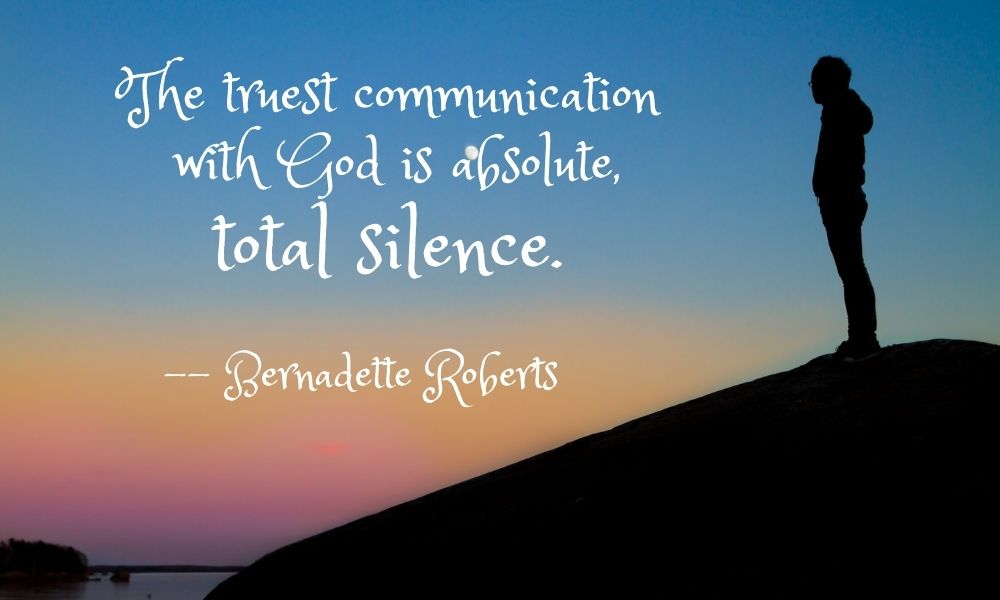 A key aspect of Level III prayer is your falling in love with silence. This is the silence of Divine Presence.

The overthinking personal mind is recognized as a key barrier to receiving that which is beyond the personal and what is to be expressed through you.

The stillness and silence of the personal mind opens you to the ever-present moment.

How can you tell the dancer from the dance – W. B. Yeats

This being known through is ever new.  It is from this ever-new experience that you are affirmed. You are not the one doing the affirmation (Level II).

You are the affirmation.

It is from this level of prayer that you gain insight into the teachings shared within different wisdom teachings and different scriptures.

Without this insider knowing what you know is about the scripture or teachings is “about” but it is not the transformational experience of revelation.

This revelation is insider KNOWING rather than interpretation by way of logic chopping. This is not understanding gained from Bible study but understanding from direct INNER KNOWING.

This insider KNOWING can be transmitted by those who KNOW but not by those who have not been graced such inner knowing.

Your pastor, guru, Iman, Rabbi or other teacher may have had years of study of their scripture but never had an experience of being KNOWN THROUGH. 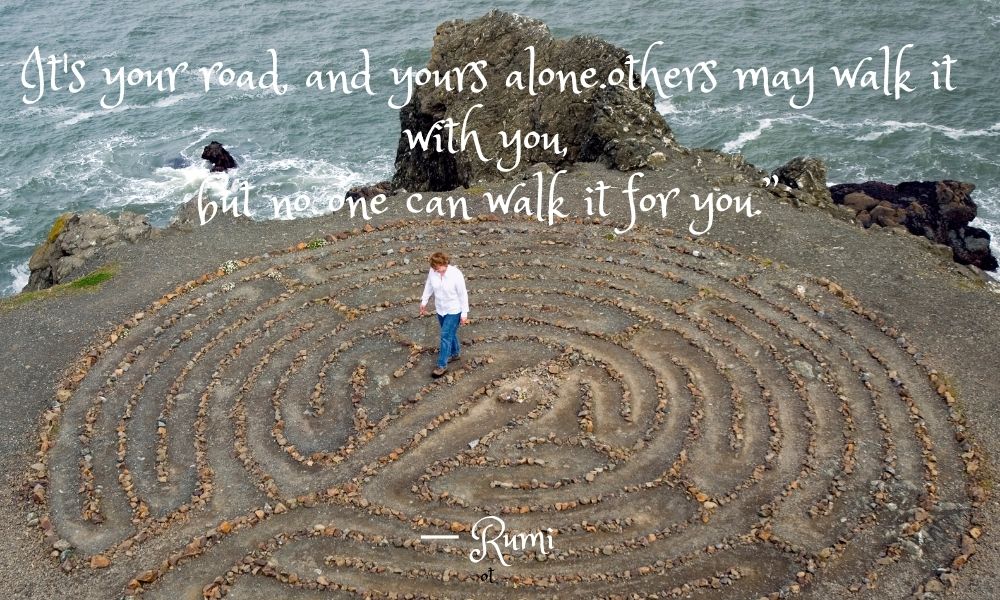 This 10 Day Prayer Challenge is being written as from the beginning of August 2021.  It often takes more than a day to write, edit and add images to one day of content.

Below are links to those days of the challenge that have been written as of 10th August 2021.

This website uses cookies to improve your experience while you navigate through the website. Out of these cookies, the cookies that are categorized as necessary are stored on your browser as they are essential for the working of basic functionalities of the website. We also use third-party cookies that help us analyze and understand how you use this website. These cookies will be stored in your browser only with your consent. You also have the option to opt-out of these cookies. But opting out of some of these cookies may have an effect on your browsing experience.
Necessary Always Enabled
Necessary cookies are absolutely essential for the website to function properly. This category only includes cookies that ensures basic functionalities and security features of the website. These cookies do not store any personal information.
Non-necessary
Any cookies that may not be particularly necessary for the website to function and is used specifically to collect user personal data via analytics, ads, other embedded contents are termed as non-necessary cookies. It is mandatory to procure user consent prior to running these cookies on your website.
SAVE & ACCEPT
Go to Top